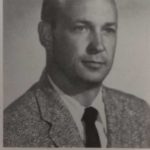 Earl Engman worked as the Track & Field coach at Santa Ana High School from 1957-1974. For nearly 38 years he worked in the Santa Ana Unified School District as a teacher, coach, administrator, and some say most importantly, a mentor. Many described Engman–a former pro-football player and Olympic athlete in track and field during the 1940s–as a “larger-than-life” figure.

Prior to his teaching and coaching at Santa Ana High, Engman competed in football, track & field, and basketball at UC Santa Barbara where he was later inducted into their Athletic Hall of Fame. As a football player, he was selected to compete in both the Senior Bowl & East-West Shrine Game. He was named all-league and Second Team Little All-American in 1947. After graduating from UCSB, he went on to play professional football with the San Francisco 49ers from 1949-1950 and 1952. In track & field, he held the UCSB Triple Jump record at 44’7.25″, as well as the UCSB Long Jump record at 23’6″. He also placed at the 1948 NCAA Championships and Olympic Tryouts.

The Earl Engman Award is given to the Rookie Official who exemplifies the character, integrity and desire of Earl Engman.