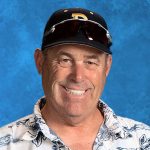 Charles “Chad” Wilson was born on 12-6-1954. He grew up playing baseball and going to Dodgers, Rams, and USC football games.  Chad started teaching at Columbus Tustin Middle School in 1990 where he would stay for 30 years. He was awarded Teacher of the Year in 2007. Mr. Wilson was a great teacher; he affected the lives of thousands of students, was the favorite teacher to most, and a champion for all. Chad officiated football starting in 1976 and was heavily involved in the OCFOA until his passing.  Chad  served at one time as the President of the association and the only person to hold two offices simultaneously as Ratings and Instructional Chair’s. He is personally responsible for our effort to keep those knees covered and a pivotal advocate for player safety. He won the Jack Brisacher award in June of 2019 for his Distinguished Service. Chad spent his entire life in service to his family, his students and to his community. He showed gratitude and love everyday. He was always willing to spend his time giving an encouraging word to a student, colleague, or friend. He was always willing to help in any way that he could. Chad was called upon to join God’s line-up on January 21, 2020. He will be missed by everyone who knew him. He had an infectious smile and an amazing presence.

His memory goes on with the Chad Wilson Memorial Scholarship. It was formed upon his passing in 2020. It is awarded to OCFOA member/s who want to follow in his footsteps and passion and learn the game of football.